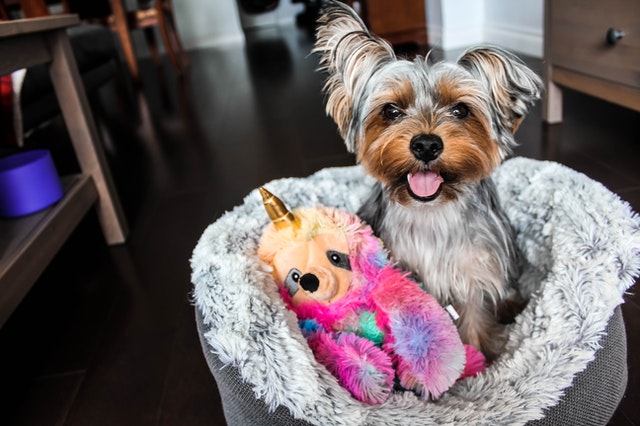 No Comments on Teach your dog to give its toyPosted in Training & education By userPosted on December 18, 2019

Training your dog to give or “drop” its toy means teaching your dog to let go of whatever is in its jaw when he receives a verbal signal. The release command is very important in your dog’s education. This can be used to protect him when he has something dangerous in his face. But, it also serves to be able to play together. So you can play pull games safely. Some dogs can be more stubborn, so be patient and persistent. The idea is that for the dog, “Giving up is winning!” But it is also a matter of trust.

Why is this command difficult?

Most dogs who don’t give their toy on their own do so because they don’t trust humans. In fact, the dog generally associates our intervention on a toy like a steal. There is nothing to gain from it and it is frustrating! So why should he give it to us for our beautiful eyes?
In addition, our human consistency often means that when we wanted to recover a toy:

A dog is far from being stupid and above all he is an opportunist. If we want him to associate us with a playmate and not a thief, we’re going to have to prove to him that he can give us the object. There are several exercises that can help build confidence in us. First of all, prepare several types of treats (from a simple croquette to minced steak), several toys, some of which (if possible) will be exactly the same. Choose toys that you can easily hold in your hand (such as rope toys, sausages), even if the dog has it in the mouth.
Learning how to play with your dog is part of our Canidelite training courses

At the first step it is better to avoid choosing dog’s favorite toy, because it will probably be less inclined to leave it. Show him any toy and say “take”. Choose a word, which will always be the same and which will mean “we start the game so take it”.
When presenting this toy, please feel free to put yourself in the playing position. That is, slightly bent over and your knees bent. When you shake the toy, use wide, but not abrupt, movements left to right (and vice versa) or back and forth. But, never use up and down movements, as this will damage your dog’s neck and other areas. The dog isn’t cut out for moving up and down, it can really hurt him. Don’t lift it off the ground either.

Don’t wait for your dog to get too aroused if you are not sure that you are controlling his arousal. Before picking up the toy, get into an upright position. This shows the dog that you don’t want to play anymore or at least that you want to take a break.
While the toy is in your dog’s mouth, present him a treat in front of the nose. As soon as your dog releases the toy, give him the treat. Repeat these steps a few times until you feel your dog anticipating by letting go of the toy as soon as you stand up.
Some dogs need a strong motivation to drop their toy for treat.

Solution 2: Teach him to trade for a toy of the same value

The other solution is that when you sit up, you stop moving the toy that is in your dog’s mouth. Without letting go of the first toy, you offer with your other hand, another toy that will move him a lot.
Out of predatory instinct, your dog should be interested in the toy that moves and not the one that is “dead”. For this step, it is better to make the first exchanges with toys of the same value, in order to increase the chances that the dog will let go. After the dog has left the first toy to become interested in the second, start playing with it again. Repeat these steps a few times, until your dog anticipates and gives you the toy.

Solution 3: Stop playing and be patient

When playing with your dog, you can stand up and hold on tight and not let go of the toy. It takes strength with some dogs and making sure you hold the toy well so that it does not validate itself by pulling and pushing you forward. Rather, you have to stay fixed. Without speaking. Your dog will then eventually drop this toy. At this point, get back into the playing position and ask him to take the toy again. His reward is being able to replay.
Summary for teaching a dog to give his toy

Bonus to exercise without stress

For better success, you can also do another exercise beforehand at home. Indeed, prepare small treats. When your dog has a toy or an object, walk past him without trying to take him and throw him a treat. Thus, he will not think that your presence means that the toy is going to disappear.
In addition, you can vary the 3 previous exercises in the same play session. Remember to let your dog win. Otherwise, it’s not a good game. He has the right to have fun too. Who would still like to lose?
Also remember to stay calm and patient. Anger is our best enemy when it comes to training a dog. Practice regularly to make it work. Dogs who have had a hard time letting go in the beginning are often the best playmates afterwards!

Add a verbal cue so that he leaves its toy

Add the verbal signal, such as give or stop. Say the signal a second before he lets go of the toy, and once he’s released, reward your dog (with another toy or treat). This means that you have to practice the previous exercises beforehand. If you have to inhibit your dog to get the “deal” it is very likely that you are inconsistent with the game or that the basic exercises are poorly mastered. So no need to get angry. Just take the time to teach him what you want. Remember, dogs respond better to positive reinforcement.

Although it may seem instinctive, you should never pull a toy (or anything else) out of a dog’s mouth or grab its head in an attempt to remove something. Never try to open a dog’s jaws. This can send the wrong message, making the action a game or a punishment for the dog to react badly. Also, it will help your dog understand that he can hold the object more firmly, or worse, swallow it. You can also get bitten.
Another common mistake owners make when playing with their dogs is choosing cue words that sound too similar to other commands. Use a single word or phrase that you can say optimistically and that your dog will associate with the “leave the object” behavior.
There are many other ways to teach our dogs to trust us for play. If you go through one of our Canidelite centers, you will be able to learn much more than the 3 basic exercises. The game is a wonderful world for the dog handler duo, especially if the game is respectful and well mastered.

Teach your dog to give its toy